The Manchester Skyline is changing with a number of large tower developments either already under way or with planning awarded.

Following the development of Media City in Salford both the old BBC and Granada TV studios in Manchester City centre are being developed.

The new developments will see the current tallest Building in Manchester; the Beetham tower at 47 storeys overshadowed by a new 64 storey tower. 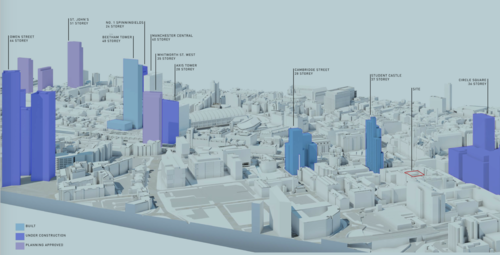 At the old Granada Studies site; home of the old Coronation Street studies, the developer Allied London has plans for a 52-storey residential tower.

This tower will be the tallest of three buildings in a 600-home private rented scheme for the St John’s district.The slender residential block, is designed by SimpsonHaugh & Partners and it is understood will also contain a luxury Hotel and restaurant.

Allied London have also gained planning for two new towers at St. John’s; which have been designed exclusively as PRC (private rented communities). These are described as landmark buildings with incredible panoramic views of the city.

At the old BBC site on Oxford Road; 677 apartments are being built, split across 12-storey and 17-storey buildings. The project forms part of the first phase of the £750m Oxford Road mixed-use development that will provide office, retail, serviced apartments and flats.